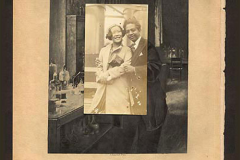 A few years later, I used this saké cup as a part of a mixed-media piece about booty. Not as in “shake your bootie” or “bootie-call” but as in plunder and spoils — spoils of colonial projects, or spoils of vacation packages. Through the tea I poured in the tiny cup, the tiny naked woman appeared within the artwork as part of the booty. Unexpectedly, during the second week of the one-month exhibition, she began to fade. When I came to refill the tea on the third week, she completely vanished.